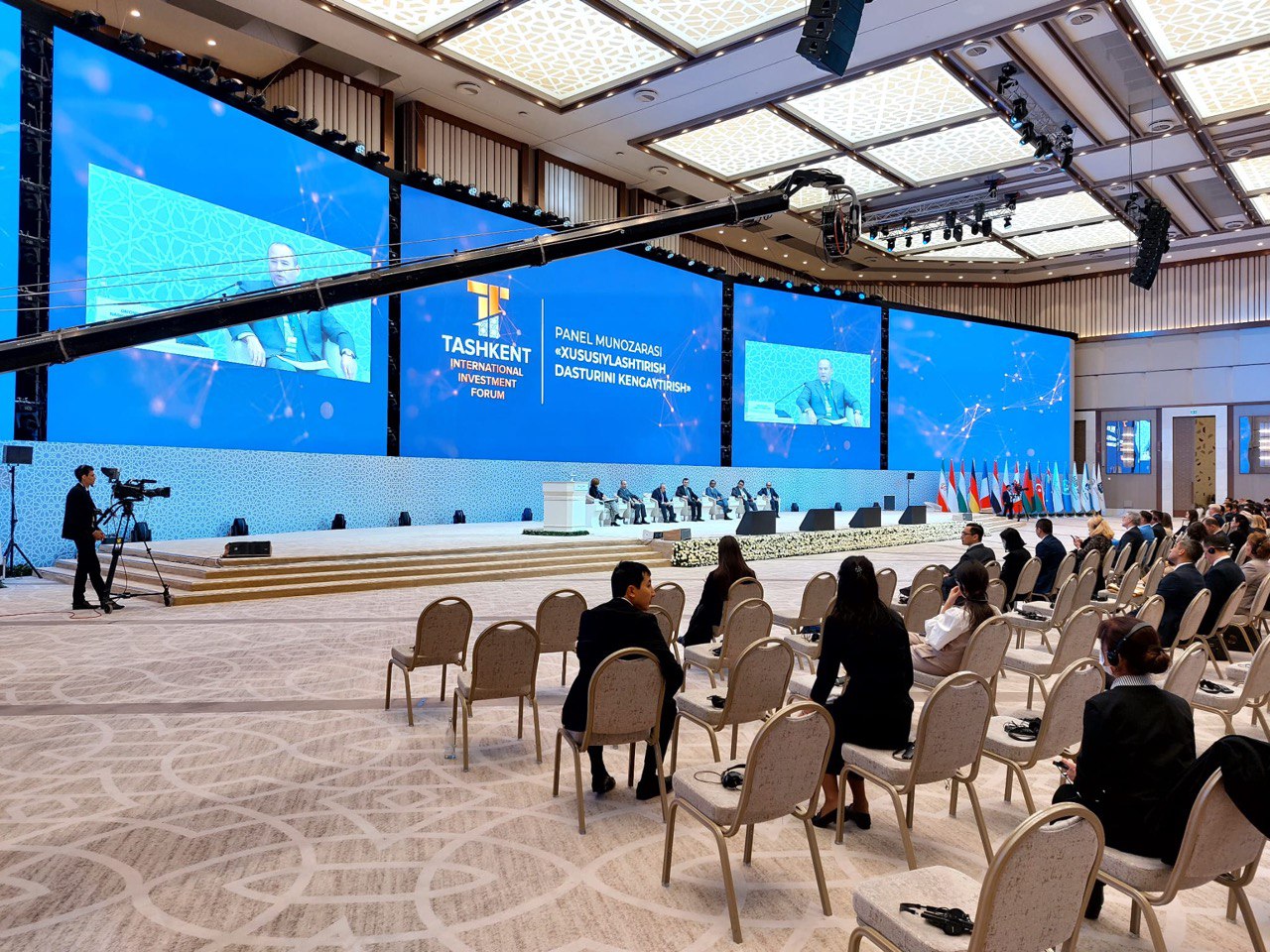 The first edition of the Tashkent International Investment Forum (TIIF) was held in the Uzbek capital on March 24-26. The Forum is a new platform intended to convey the investment potential of Uzbekistan and act as a magnet for international investors and businesses interested in integrating into the dynamically developing market of Uzbekistan.

The inaugural edition of the TIIF attracted over 1,500 participants, including representatives from all major International Financial Institutions (IFIs) namely the European Investment Bank (EIB); the European Bank for Reconstruction and Development (EBRD); the Asian Development Bank (ADB); the Asian Infrastructure Investment Bank (AIIB) and the International Finance Corporation (IFC); as well as high-level delegations from the other Central Asian republics; Saudi Arabia; Pakistan and the UAE, to name a few.

The various panel discussions organised centred on the investment and trade opportunities in the priority sectors of the country as outlined in the development strategy of New Uzbekistan for the period 2022-2026. The rich discussions touched upon mechanisms for attracting investment, liberalizing trade and improving the competitiveness of the Uzbek economy; new steps towards industrialization; measures to transform the national energy sector and switch to alternative energy sources; and strengthening the transport interconnection of the countries of the region and improve their transit potential. Importantly, in the framework of the government’s objective for the proportional and even development of the country, separate breakout sessions were organised to discuss the investment potentials of every single region, from Andijan to Karakalpakstan.

The opening ceremony counted with the participation of the President Shavkat Mirziyoyev. In his address, President Mirziyoyev outlined the key achievements of the 2017-2021 Strategy of Actions (the country’s five-year development plan), among which he highlighted the following:

During this initial phase of reforms, Uzbekistan achieved notable progress in structural transformations, improving the investment climate and ensuring more free, transparent and level playing field for entrepreneurs. The first results of such reforms are already visible. Uzbekistan has consistently been improving its position on international rankings including the World Bank Doing Business Index; the Heritage Foundation Index of Economic Freedom and the UNDP’s Human Development Index. 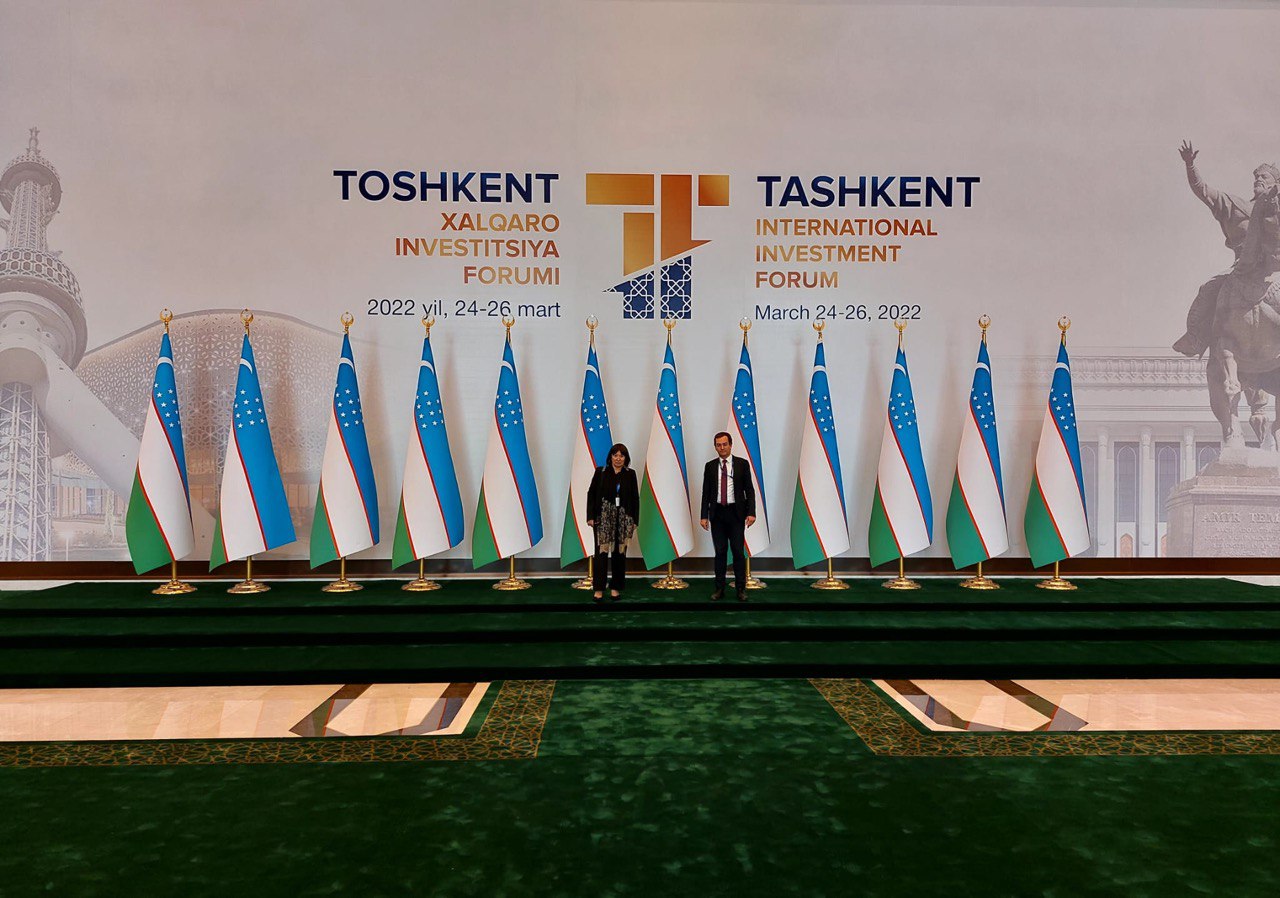 In his speech, President Mirziyoyev also outlined the main contours of the country’s recently adopted national development strategy for the period 2022-2026. The strategy envisages an acceleration to a market economy while maintaining macroeconomic stability. It aims to attract USD 120 billion in investments during this period with a focus on transportation, education, green economy and energy. Further priorities include:

Let us now look in greater detail at three of the themes that dominated the discussions at the Forum: privatization, connectivity and the green economy.

Hundreds of enterprises in the chemical, tourism, industrial and other spheres will be privatized in the coming years. Notably, the banking sector will undergo privatization as well. Several Uzbek state-owned banks, including Sanoatkurilisbank, Asaka Bank, and Mortgage Bank, will have their shares listed on the stock market starting this year. Recent privatization deals include the acquisition by Turkish Coca-Cola İçecek of 57 percent of state shares in Coca-Cola Bottlers Uzbekistan; or Hungarian bank OTP purchasing 75 percent of state shares in Ipoteka Bank, one of the most significant deals in the Uzbek financial sector.

A key theme of Uzbekistan’s economic revitalization since 2017 has been to accelerate infrastructure development through the introduction of Public-Private Partnerships (PPPs) in order to more effectively leverage private sector expertise and financing. In January 2021, a long-awaited amendment to the PPP Law was approved and signed, creating opportunities in sectors including renewable energy, health, and transportation.

On the sidelines of the Forum, the government of Uzbekistan finalised a Public-Private Partnership agreement for a new thermal power plant in the Syrdarya region, which will help modernise the country’s power sector, reduce costs, and cut carbon emissions. The plant will be built by a French-Qatari-Japanese consortium comprised of Électricité de France (EDF), Nebras Power Sojitz Corporation and Kyuden International. 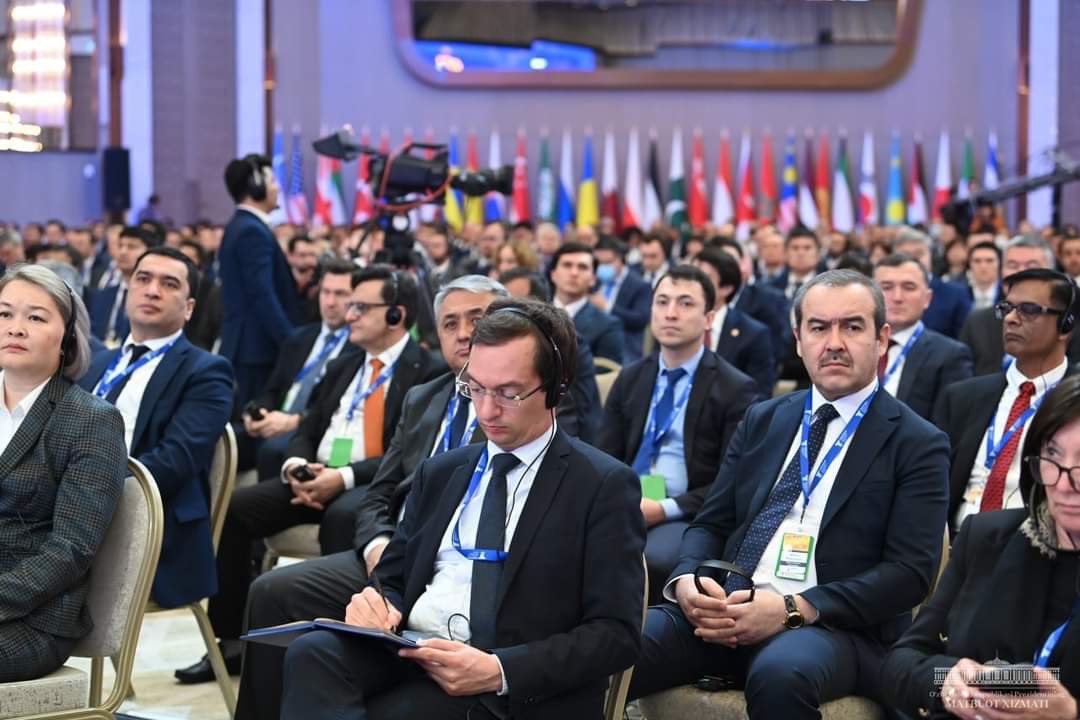 Supply chain bottlenecks related to COVID-19 restrictions has dramatically elevated the cost of trade over sea. Participants of the Forum saw this as an opportunity for Central Asian to tap into global trade flows. But as the discussions showed, substantive investments in the country’s infrastructure capacities are required including active implementation of IT solutions.

Special attention during the Forum was devoted to two projects in particular:

— The China-Kyrgyzstan-Uzbekistan railway corridor. It is expected that a feasibility study will be completed this year in order to mobilise the required international financing to construct this new railway. This project will shorten the route between China and Western Europe, making Uzbekistan and Kyrgyzstan key transit countries.

— The Trans-Afghan railway will create a direct connection for Uzbekistan to the Indian Ocean through the Pakistani ports of Karachi, Gwadar and Qasim. On February 2, 2022, these three countries in Tashkent agreed to a roadmap for the construction of 600-kilometre-long rail project connecting Uzbekistan, Afghanistan and Pakistan (Termez – Mazar-i-Sharif – Kabul – Peshawar railroad), linking Uzbekistan to the huge consumer markets of South Asia including Pakistan, India and Bangladesh. The railway, once fully operational, will be the shortest and most economical route connecting Central Asia with the Indian Ocean sea lines of communication. 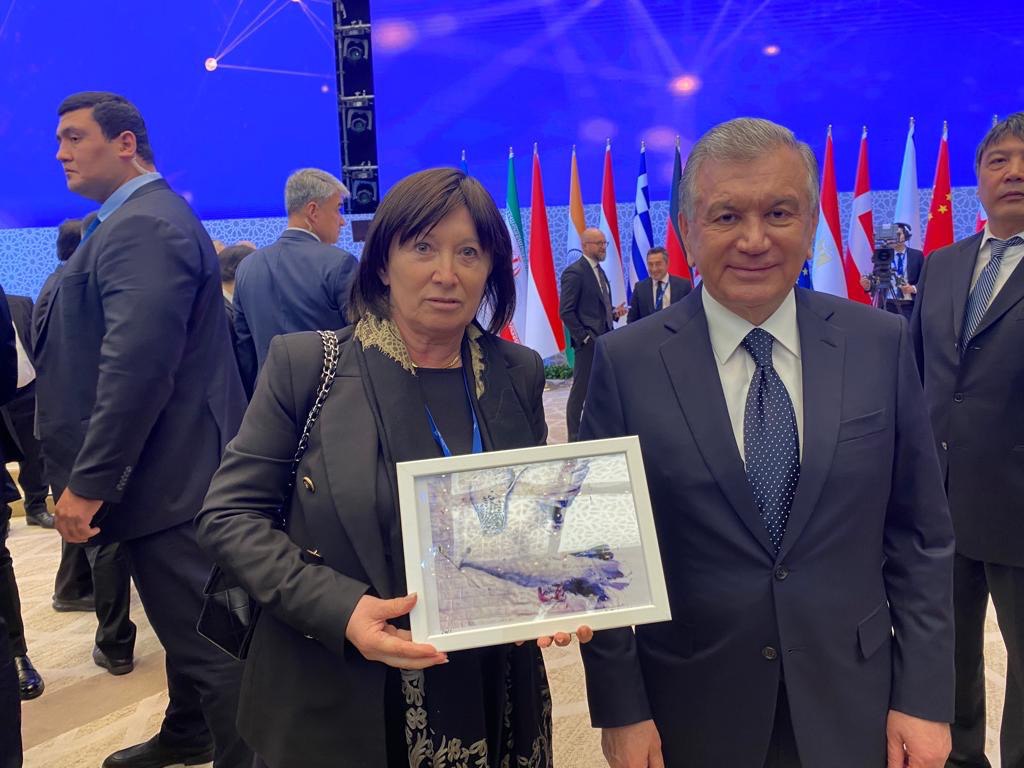 Uzbekistan has set a target of 25 percent of renewable energy (solar, wind, and hydro) generation by 2030 and has announced its goal to be carbon neutral by 2050. For the time being, however, Uzbekistan’s electricity generation is currently dominated by gas, which will continue to be the backbone of the country’s power generation mix. By 2030, the country’s reliance on natural gas should gradually be reduced from 76 to 50 percent.

To fulfil the country’s growing energy needs, renewables have been making quick inroads into Uzbekistan. For example, the first solar photovoltaic (PV) project plant with capacity of 100 MW was introduced and put into operation in August 2021 by Emirati company Masdar. Two more are planned: one in Surkhandarya region and one in Navoi region.

At the Forum, the numerous representatives of the International Financial Institutions present  expressed their interest in financing projects to facilitate Uzbekistan’s energy transition. The EBRD, for example, announced that 50 percent of their funding will fall on such projects to support the transition from high-carbon to low-carbon energy production.

The Tashkent International Investment Forum was not simply a succession of statements of good intention. Substantial agreements were reached. In the margins of the Forum, the launch ceremony was held for the thermal power plant project in the Angor district of Surkhandarya region, attended by President Mirziyoyev. The total cost of the project is estimated at USD 1.2 billion. The new plant is expected to be almost twice as efficient as older models (which often suffer from low efficiency and unreliable supply), helping to decrease gas consumption, reduce the country’s carbon footprint, and gradually support the integration of renewable energy into the country’s energy mix.

The Forum concluded with the announcement of investment agreements and contracts worth USD 7.8 billion as well as preliminary agreements on the implementation of projects worth USD 3.5 billion. To give two concrete examples:

— A cooperation agreement worth USD 500 million involving Uzbekistan-operating companies Ferkensco Management Limited, Enter Engineering Pte. and the Switzerland-based Casale SA was signed to support the construction of an ammonia-based fertilizer plant in Uzbekistan. 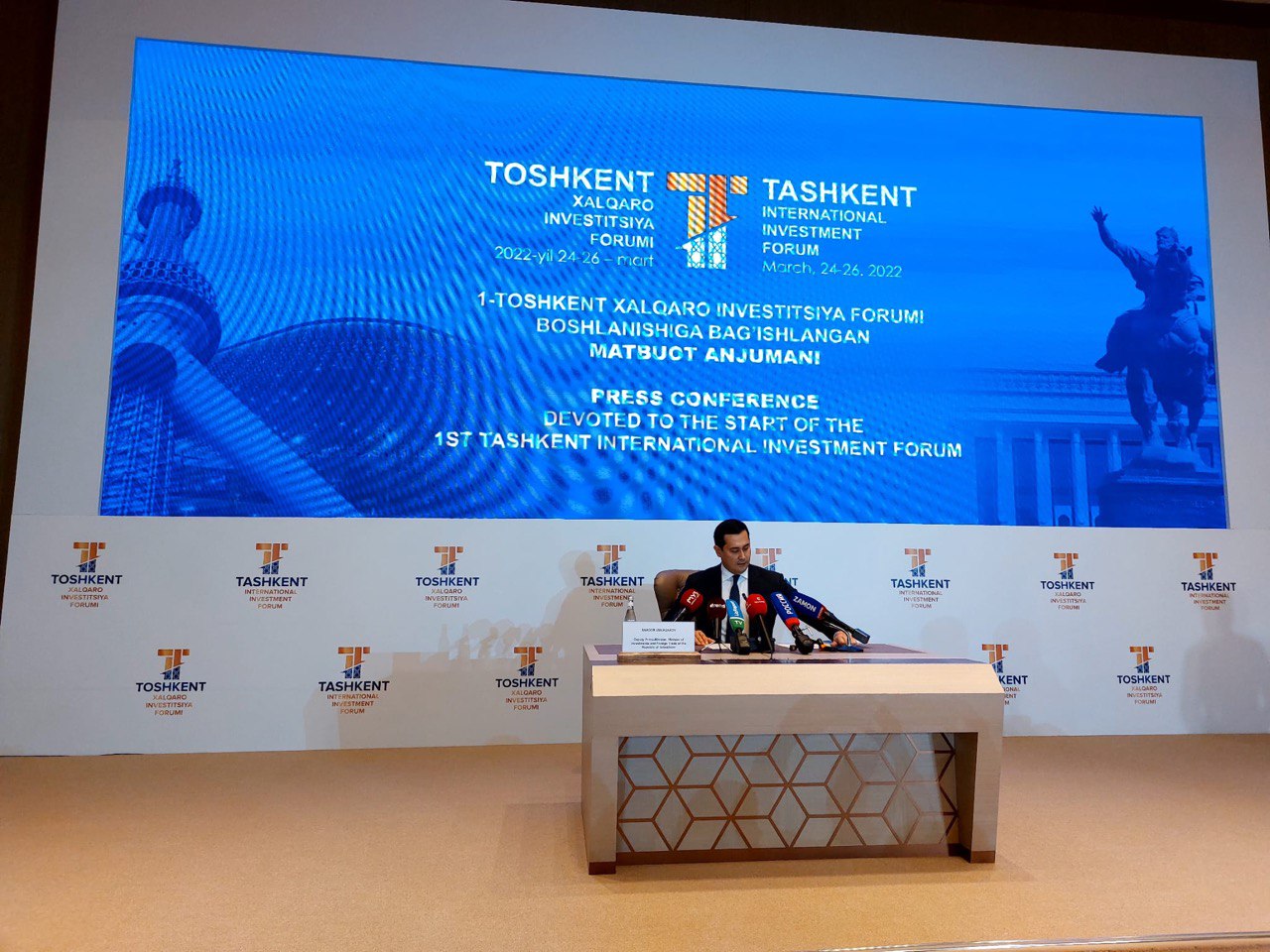 For a long time, Uzbekistan was, from an economic point of view, a closed country. The interest from international investors was therefore relatively small. Since the initiation in 2017 of a broad and profound programme of reforms which touched all spheres (politics, economy and the society), the Uzbekistan we see today is radically different than the Uzbekistan of one lustrum ago.

The Tashkent International Investment Forum is expected to become a yearly occurrence, providing a platform for attracting global investment, know-how and cutting-edge technology to Uzbekistan in order to boost economic productivity, industrial capacity and export potential of the country, as the country continues in its relentless journey of economic restructuring, transformation and modernisation.